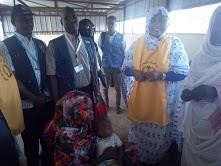 Al-Daein , Apr.25(SUNA)- The Extended Immunization Department at Ministry of Health and Social Development in East Darfur State launched at Al-Neem Health Center (B) Thursday a joint campaign for eradication of measles, VAD and polio. Present at the launching ceremony were Director-General of the Health Ministry, Dr Fatima Ibrahim Saeed, federal supervisors and director of the Extended Immunization Department. Dr Fatima said the campaign would cover all state’s localities. Villages and IDPs camps , urging families and mothers to respond to this campaign by immunizing their children. She added that the Health Ministry will exert huge efforts to make the campaign a success. Ab/ab