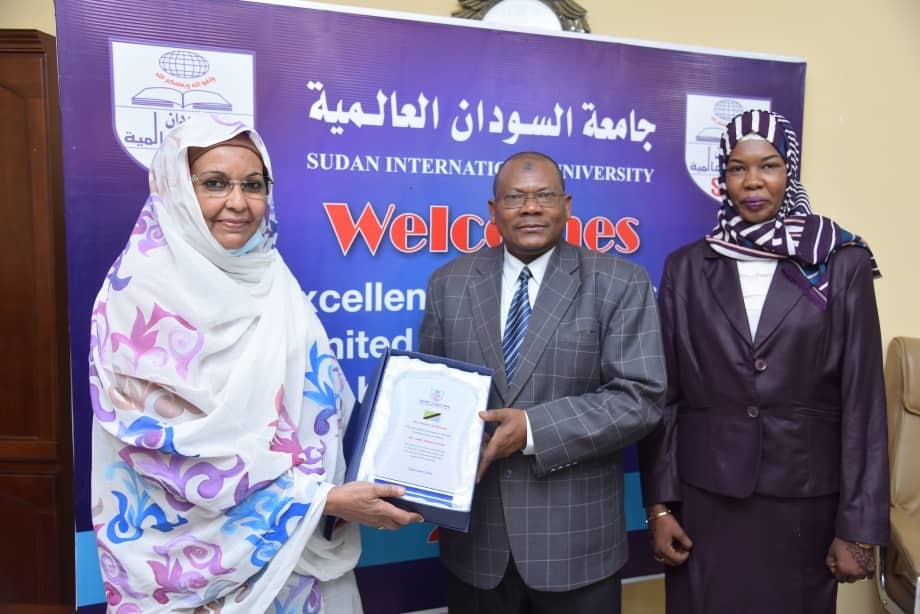 Khartoum, Oct. 9 (SUNA) – The Ambassador of the United Tanzania in Khartoum, Mr. Salimiya Hajj Kembo has asserted strength of the Sudanese-Tanzanian relations, and the embassy’s endeavor to enhance relations between the two countries. He noted during his visit in the 8th of October of the International University of Sudan that the visit aims to get acquainted with the activities of the university’s programs and activities in the field of training, quality, scientific research, the academic aspect and student exchange, he indicated that the visit is the first of its kind, and which will be concluded with an agreement between the embassy and the university. The Tanzanian ambassador was accompanied by a delegation from the embassy’s media department including Rania Ibrahim Bousha, the Director of Information and Public Relations at the embassy, as part of a series of visits the embassy plans to some educational institutions, especially Sudanese universities, including the International University of Sudan. The Tanzanian embassy’s delegation was received by Professor Ishraga Bashir Mohammed al-Hassan, the Secretary of Scientific Affairs at the University, and representatives of faculty deans, Professor Wadeeh Madhoun, the Dean of the College of Medicine, Professor Abbas Menoufly, Dean of the Faculty of Economics, in addition to the Dean of the Computer College, Professor Mohammed Osman al-Tayib al-Bashir, Dr. Ali al-Taishi, Director of the Sudan Language Center. The university and a number of faculty members. The Tanzanian ambassador to Khartoum, Mr. Salimiya Hajj Kembo noted that the visit will work for the activation of the bilateral relations and agreements, the exchange of visits between universities teaching staffs in both countries, indicating that the visit is a start for consolidation and strengthening Tanzania’s relations for its interest in developing education in Africa, hoping that the visit would achieve the cultural, academic goals between the Tanzanian and Sudanese universities. The visiting Tanzanian’s embassy’s delegation was received by Professor Ishraga Bashir who stressed strength of the relations and joint cooperation between Tanzania and Sudan, appreciating the ambassador’s keenness on cooperation with the Sudanese universities, especially in the medical economic, banking studies and in the technological fields. The two sides have agreed on memorandum of understanding between the International University of Sudan and the Tanzanian embassy, in which both parties define the types and forms of cooperation with the assigning of three Tanzanian universities for cooperation with the International University of Sudan. It is worth noting that Professor Bakri Osman Saeed, the president of the International University of Sudan , and Vice President of the Federation of African Universities for Central and East Africa has welcomed the visit of the Tanzanian ambassador and the accompanying delegation, emphasizing that agreements will be signed between the university and Tanzanian universities that include all aspects related to scientific research, student exchange, faculty exchange, visits and closer relations in distance education, e-learning and others, and that the agreement will be a model for the other universities. ta