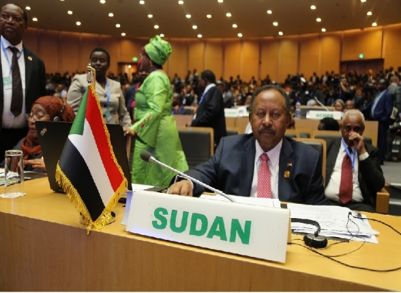 Addis Ababa, Feb. 9 (SUNA) – The Prime Minister, Dr. Abdalla Hamdouk, has met on the sidelines of his participation in the 33rd African Summit in Addis Ababa with the Chadian President, Idris Deby. In a press statement to SUNA, the State Minister for Foreign Affairs, Dr. Omer Gamar-Eddin, said that the meeting has affirmed firmness of the relations between the two sister countries. He said that Dr. Hamdouk has referred to the possibility of the Chadian President's support to the ongoing peace negotiations in Juba, based on his relations with some of the Sudanese armed struggle movements which are participating in the negotiations. He indicated that the meeting also reviewed ways of bolstering the relations between Sudan and Chad in the future and asserted the importance of coordination between the two countries at the international and regional forums. Dr. Gamar-Eddin said that Dr. Hamdouk has congratulated President Deby on the success of his chairmanship to the African Review Mechanism. MO