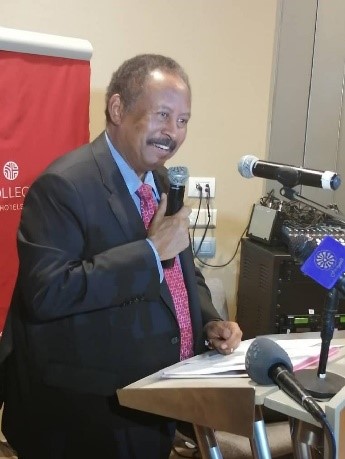 Brussels, Nov. 12 (SUNA) – The Prime Minister, Dr. Abdalla Hamdok, has thanked the European Union for its continuous support to the struggle of the Sudanese people, explaining that the support of the European Union is appreciated by the Sudanese people. This came in his address to the debate session at the European Parliament debate on the situation in Sudan with the Development and External Relations Committees, in presence of the Minister of Industry and Trade, Abbas Madani, the Minister of Labor and Social Development, Lina Al-Sheikh, and the acting Charge d’Affaires of Sudan to Belgium and the European Union, Khalid Al-Jizouli. Dr. Hamdok has affirmed at the debate session the aspiration of Sudan to establish a strategic partnership with the European Union. He reviewed the priorities of the transitional government, including the cessation of war, achieving sustainable peace, addressing the economic crisis, and reforming state institutions. He stressed Sudan's commitment to a balanced foreign policy that takes into account the country's interest, reiterating the government keenness to strengthen its cooperation and relations with all countries in the world. He pointed out that the transitional government is keen to promoting the women participation in the levels of government. The Prime Minister called on the European Union to contribute to removing Sudan from the list of state sponsors of terrorism. The members of the European Union Parliament have affirmed their support to the transitional government in different fields. MO