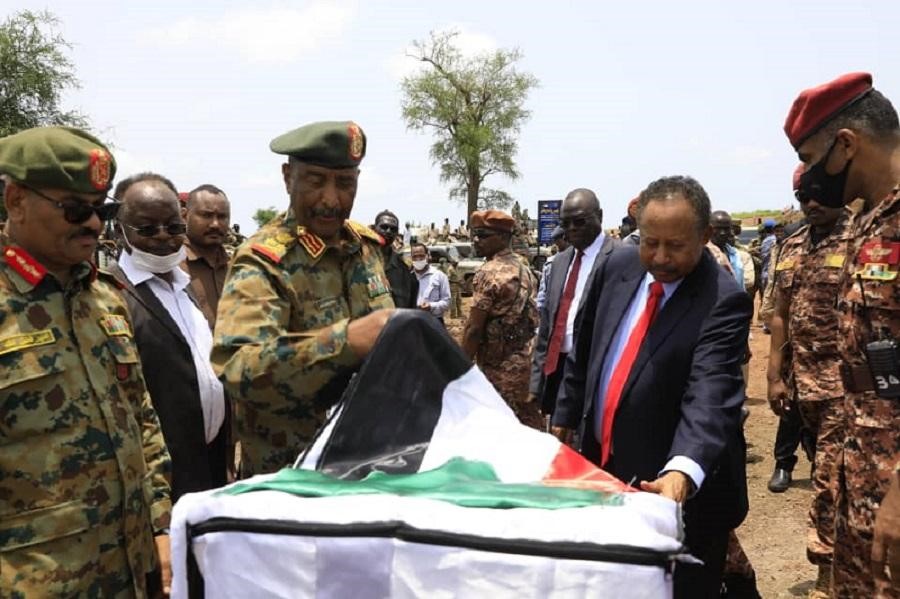 Khartoum, Aug. 16 (SUNA) – The President of the Transitional Sovereignty Council and the Prime Minister, Dr. Abdalla Hamdouk, Monday launched in Wad Koli at Fashaqa area a number of projects, including Wad Koli Bridge, in the presence of a number of members of the Sovereignty Council and ministers, the Armed Forces’ Chief of Staff, the Director of the Intelligence Service and senior officers of the Armed Forces, the Police Forces and the Rapid Support Forces along with leaders of the people’s and executive work and the civil society and citizens of Wad Koli area. The inauguration came as part of Gedarif State’s and the Second Armed Forces’ Infantry Division to the 67th anniversary of the Armed Forces. Addressing a mass rally on the occasion, the Prime Minister has praised the sacrifices of the glorious Sudanese Revolution and lauded the patriotic role done by the Armed Forces martyrs for the defence and unity of the homeland. He said that the Armed forces have always remained faithful to the homeland and aligned with the people’s choices, referring to the Armed Forces bias towards the people’s choices in October 64 evolution, the April 84 revolution, and the glorious December 2019 AD, adding that “we expect more from the Armed Forces in protecting the homeland and the democracy. The Prime Minister stressed that the transitional government, with its civil and military parts, has made efforts that contributed to Sudan’s openness to the world and a return to the international community, despite the complicated transition it is facing, explaining that this return will allow the provision of capabilities, rehabilitation and promotion for the Armed Forces to carry out its role in protecting the homeland. He stressed that the inauguration of facilities today a Fashaqa area marks the beginning of ending the era of marginalization and contributes to linking this area with roads, schools and hospitals, especially in the rainy season, indicating that this area is one of the richest areas of Sudan and can provide satisfaction for its people and Sudan in general. He said that the transitional government works in harmony and cooperation between its civilians and the military parts, stressing that this unique Sudanese model is based on partnership and aims to protecting the country from the slipping into dispersal, splitting, divisions and civil wars. Dr. Hamdouk pointed out the partnership between the civil and military parts will allow the country to cross to safety and to establish a stable democratic system for the benefit of the people of Sudan. MO