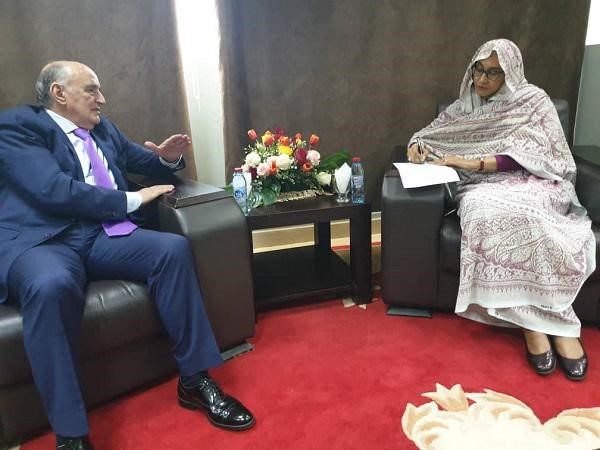 Khartoum, Nov. 4 (SUNA) – The Assistant Undersecretary of the Ministry of Foreign Affairs, Ambassador Ilham Ibrahim Mohamed Ahmed, received Monday, Ambassador Mohamed Belaish, the Director of the African Union Office in Khartoum. Ambassador Belaish has praised the positive political developments witnessed in Sudan, no-ting that the peace process in Sudan is progressing well, indicating the need to mobilize the international community support in order to rebuild the country and address the situation of the war-affected areas. He stressed the importance of coordinating efforts to enhance cooperation between Sudan and the African Union, expressing the serious desire of the AU to contribute to the success of the transitional period, its support for the ongoing peace negotiations in South Sudan. On her part, the Assistant Undersecretary praised the ambassador's concern, and the continued support provided by the Chairperson of the AU Commission Mr. Moussa Faki to Sudan, praising the active role played by the AU through its Special Envoy to reach the agreement during the last phase. She emphisized the Sudan's confidence in the AU, pointing to the slogan of finding African solutions to the African problems, stressing the need to tighten coordination for unifying efforts to support Sudan during the transitional period, and the role that the AU can play in this re-gard. On the other hand, it was agreed to continue enhancing cooperation and consultations with the AU Office in Khartoum during the coming period. ta

Al-Batahani: The National Building Forum an Open National Platform Khartoum, July 2 (SUNA) – The head of the expert committee of the University of K... Read More
10 views
Police: Calmness and stability of security situations in all the states
On 03 July 2020

Police: Calmness and stability of security situations in all the states Khartoum, July.2 (SUNA) - The regular meeting of the police leadership chaired... Read More
8 views
Campaigns of Stranded to Launch on 21st of June via Khartoum Airport
On 18 June 2020

Faisal Regrets what Circulated by Media and some Newspapers’ Sites Khartoum, June 1 (SUNA) – The Minister of Culture and Information, the governme... Read More
88 views
Chinese Ambassador: Cooperation with Sudan will continue
On 02 June 2020