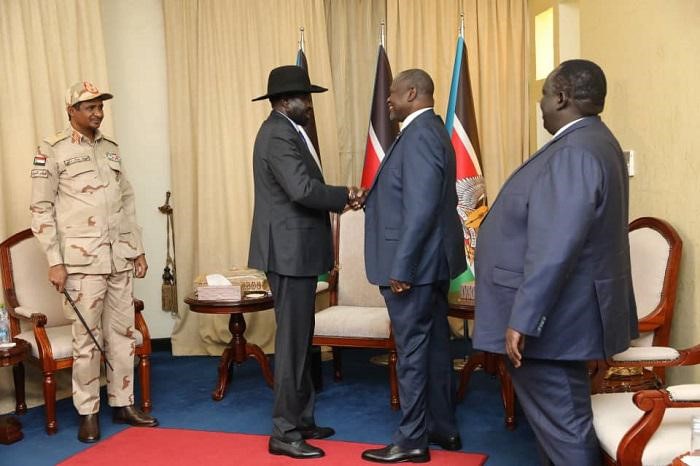 Juba, Dec. 11 (SUNA) – The President of the Republic of South Sudan, Salva Kiir, the First Deputy of the Transitional Sovereignty Council, Lt. Gen. Mohamed Hamdan Daglo, and the opposition leader in South Sudan State, D. Riek Machar, Wednesday held a tripartite meeting at the Republican Palace in Juba and discussed the developments in South Sudan peace file in the first 50 days. In a press statement after the meeting, Lt. Gen. Daglo said that the Sovereignty Council’s Chairman, Lt. Gen. Al-Burhan, is giving a special concern to the peace agreement in South Sudan and gave directives to follow up this agreement until its implementation. Daglo pointed out that Sudan and South Sudan are facing a major challenge represented in achieving peace on their lands, stating that peace represents a real test for the international community’s readiness to support peace in the two countries. He stressed absence of any political detainee or prisoner of war of the armed struggle movements in Sudan, calling on the media to contribute positively to bolstering the peace process, indicating that the Sudanese people would hear good news on the peace issue in the coming days. Meanwhile, the Advisor of South Sudan President, Tut Galwak, has affirmed the commitment of South Sudan State to sponsor implementation of the peace agreement. He expressed South Sudan thanks and appreciation of the efforts exerted by Sudan government for realizing peace in South Sudan. MO