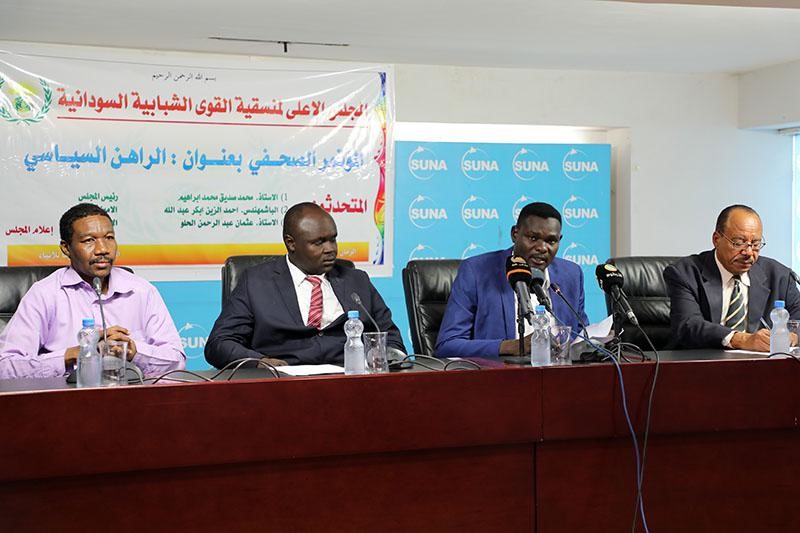 Khartoum, July 14(SUNA)- The Higher Council for Sudanese Youth Forces(HCSYF) Urged the parties represented in the Transitional Military Council and Forces of Freedom and Change(FFC) to reach deal realizing peace and paving way for peaceful transition of power through elections. The HCSYF Chairman, Mohamed Sidiq Mohamed Ibrahim , who was speaking t SUNA press forum Sunday , that peace is a project of partisan , tribal or regional gains , calling for looking to peace as civil value not subjected to bargaining and that its ultimate goal is to be preserve the citizen’s life and dignity. HCSYF secretary-General, Engineer Ahmed Al-ZainAbbakar Abdalla called the all political forces, and civil society components as well as women and youth to take part in the transition period to achieve a comprehensive peace based on consensus and reconciliation. Al Zain also reviewed the Council's initiative on nation- building strategy , pointing out that the economy situation and living difficulty were the main causes of the revolution breakout. “ We see initiatives are forwarding as people are still suffering from the same issue , prices are soaring and there is difficult in transport” Al-Zain underlined, disclosing that the council has prepared a social strategic document on the nation-building. Deputy secretary of the HCSYF Foreign affairs , Amjad Ibrahim Hassab-Alla, for his part, said the council includes 27 youth alliances and called youth to join the HCSYF. In the same context, the HCSYF states official, Ali Hamid Nura-Eddin said the council forwarded programs for the states to include the periphery voices , adding that the council aims to achieve peace and peaceful-co-existence among all components of the Sudanese society away from self-benefits. He added that the work adopted by the council was a contribution from youth , referring to Rwanda experience in areas of reconstruction and peace –building. Amjad further added that the council’s initiative would be submitted to the coming interim government. ab

Ministers of Foreign Affairs and Irrigation Meet President Trump Khartoum, Jan. 15 (SUNA) - In the context of their participation in the talks on the... Read More
47 views
Khartoum State: Agro-animal Production Represents Most Important Reform Program
On 16 January 2020