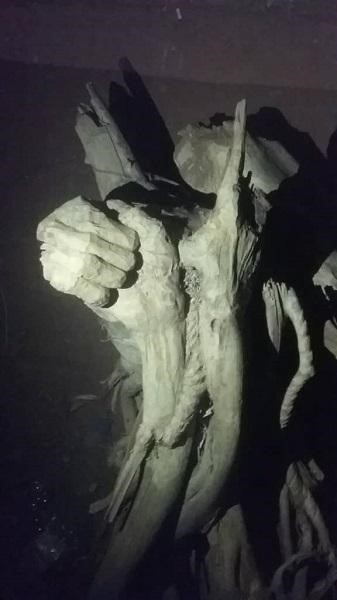 Khartoum, May 23 (SUNA) The Sudanese plastic artist, sculptor, Awad Issa Awad Omer, has presented the spirit dominating among the revolionists by sculptor on a tree trunk, expressing the cohesion, tight hold of the hands and the intertwining that show the spirit of love among the revolutionaries and their solidarity as they support each other, a matter that reflect the noble values in Sudanese society as a whole. Awad noted to SUNA that this work was inspired by the natural formations of a trunk of the tree, which was closer to the hands holding tight, and which agrees with the brotherly spirit and intimacy among the revolutionaries. He said that he will add decorations and metal works of copper and iron colors of African character symbolizes freedom and culture in Africa with profound meanings in general and especially the Sudanese one, indicating that it is time to return to the roots and documentation of the vast cultural and traditional heritage of the African people, which is one of the things that occupys him, and which he addressed in his doctoral thesis under the title: "The impact of ancient African sculpture on the Modern European art ", at the Sudan University of Science and Technology. Artist Awad Omar said that this work is now in the art exhibition of the sit-in area of the vocational training center (for the youth of plastic revolution) and later will determine a place for the exhibit of all the objectives of the revolution after the end of the sit-in , especially that it carries characteristics of two and three dimensions. Issa has revealed that a great artistic work in the area between the General Command of the Armed Forces and the area of Burri representing the martyrs of the revolution, as well as portraits and a collection of carvings on the wall and the traffic conjuctions. Dr. Awad Issa Awad Omar who is an Assistant Professor at the University of Sudan for Science and Technology, Faculty of Safety Science and Technology, indicated the existance of ideas, and that this revolution will explode the energies of creativity and shed light on the role of arts in the rise of the new Sudan. ta