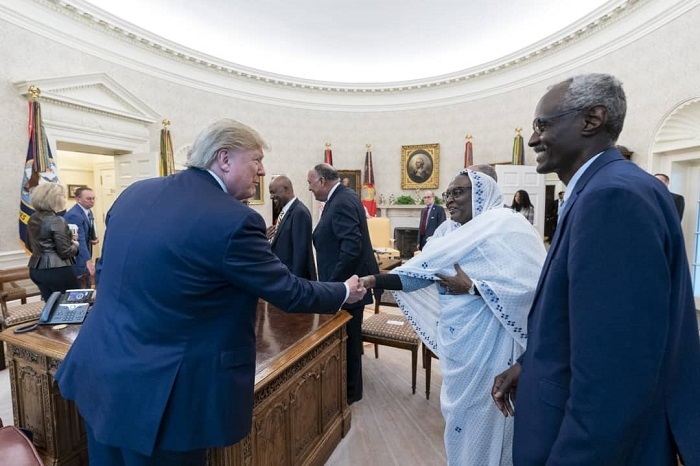 Khartoum, Jan. 15 (SUNA) - In the context of their participation in the talks on the Ethiopian Renaissance Dam, which are sponsored by the US Secretary of the Treasury, the Foreign Minister, Asma Mohamed Abdalla, and the Minister of Irrigation and Water Resources, Yasser Abbas, met with US President, Donald Trump, at his office in the White House, in the presen-ce of the Ministers of Foreign Affairs and Irrigation of the Republic of Egypt and the Republic of Ethiopia and the President of the World Bank. During the meeting, the US Secretary of the Treasury briefed President Trump on the pro-gress of the talks which deal with the details of filling and operating the dam. He appreciated the great positive role that the Sudanese delegation continued to play during all the sessions hosted by Washington, and expressed praised of the performance of the Mi-nister of Irrigation and Water Resources, Yasser Abbas. Meanwhile, President Trump urged the three parties to expedite completion of a comprehen-sive agreement on the Renaissance Dam, saying that he would later give a directive to orga-nize a ceremony for the agreement's signing in Washington.  He referred to the possibility of providing technical assistance to the three countries if they reached an agreement. The talks on Renaissance Dam are expected to be concluded today (Wednesday) and the three delegations will return to Washington within a period to be determined to engage in a session of talks that would be the last to complete the comprehensive agreement. Ab/MO

FM: Momin is not Neglected in Doha Khartoum, Feb. 16 (SUNA) - The Ministry of Foreign Affairs Sunday issued a statement on reports circulated in the m... Read More
4 views
Fm Undersecretary Praised Relations Between Sudan and Kuwait
On 17 February 2020