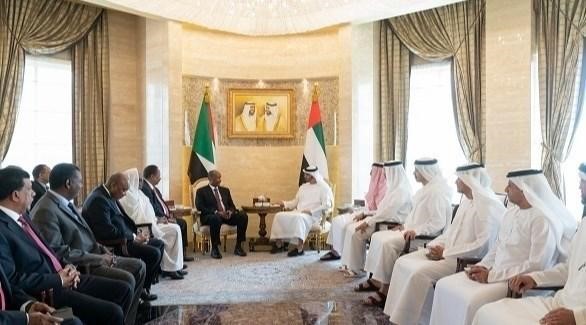 Khartoum, Oct. 8 (SUNA) – The Crown Prince of Abu Dhabi and Deputy Supreme Com-mander of the Armed Forces in the United Arab Emirates (UAE), HH Mohamed bin Zayed Al Nahyan, has received in the Coast Palace in Abu Dhabi the Chairman of the Sovereignty Council, Lt. Gen. Abdul-Fattah Al-Burhan, and the Prime Minister, Dr. Abdalla Hamdok. The two sides have discussed the bilateral relations between the two sister countries, especially in the economic, investment and trade fields and means of strengthening them further, besides the political developments in the Sudanese arena. They also reviewed the developments at the Arab, regional and international levels and the dossiers of mutual concern. HH Sheikh Mohamed bin Zayed Al Nahyan affirmed the stand of the United Arab Emirates (UAE) alongside Sudan in its current important stage, affirming his country’s support to the security, peace and unity in Sudan and its readiness to help realizing the aspirations of the Sudanese people for development and prosperity. He described the Sudanese – UAE relations as historic and based on strong ties of brotherhood and mutual trust and respect, affirming the keenness to reinforce the bilateral relations in the coming stage for the interest of the two brotherly nations. He stated that the UAE has encouraged dialogue between the various Sudanese forces during the past period based on its keenness on the stability of Sudan and its unity, the safety of its institutions and unwavering approach in working to preserve the national state, stressing that Sudan has presented an important and civilized model in the Arab arena in crisis management and achieving consensus that upholds the supreme national interests and preserves the unity, stability and integrity of the nation. He wished success for Lt. Gen. Al-Burhan and Dr. Abdalla Hamdok in their great national tasks and responsibilities in the coming period, affirming the commitment of the United Arab Emirates to provide every possible support to Sudan for success of the transitional period and achieving the aspired goals. The meeting was attended by HH Sheikh Tahnoon bin Zayed Al Nahyan, the National Security Advisor, HH Sheikh Mansour bin Zayed Al Nahyan, the Deputy Prime Minister and Minister of Presidential Affairs, HH Sheikh Abdullah bin Zayed Al Nahyan, the Minister of Foreign Affairs and International Cooperation, Ali bin Hammad Al Shamsi, the Deputy Secretary General of the Supreme Council for National Security and HE Jassim Mohamed Bu Atabah Al Zaabi, Head of Finance Department; HE Mohammed Mubarak Al Mazrouei, the Undersecretary of the Crown Prince's Court, and HE Hamad Mohamed Hameed Al-Junaibi, the UAE Ambassador to Sudan. The Sudanese side at the meeting was attended by Asma Mahamed Abdalla, the Foreign Minister, Dr. Ibrahim Al-Badawi, the Minister of Finance, the Minister of Industry and Trade, Madani Abbas Madani, and Amin Abdalla Al-Kareb, the Ambassador of Sudan to the United Arab Emirates. MO