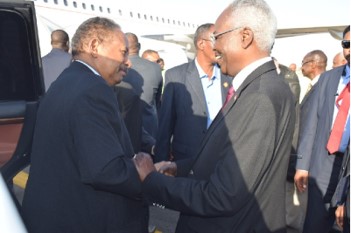 Khartoum, Feb. 16 (SUNA) – The Prime Minister, Dr. Abdalla Hamdouk, Sunday evening returned home after an official visit to the Federal Republic of Germany, during which he was accompanied by the Minister of Defence, Lt. Gen. Jamal-Eddin Omer, the Minister of Energy and Mining, Adel Ali Ibrahim, the State Minister for Foreign Affairs, Dr. Omer Gamar-Eddin, and the Director General of the General Intelligence Service, Gen. Jamal Abdul-Majid Gasm-Essid. Dr. Hamdouk has participated in Munich at the International Security Conference which was held during February 14 – 16. The Prime Minister and the accompanying delegation were received upon return at Khartoum Airport by the Cabinet Affairs Minister, ambassador Omer Manis, and a number of senior officials. It is to be noted that Dr. Hamdouk held talks in Germany with the German Counselor, Angela Merkel, on the means to strengthen the bilateral relations between the two countries and met on the sidelines of the International Security Conference in Munich with the Kuwaiti Prime Minister and the Foreign Ministers of the United States, Russia, Finland and the Netherlands, in addition to efficient personalities who are concerned with Sudan affairs and members of the Sudanese community in Germany. MO