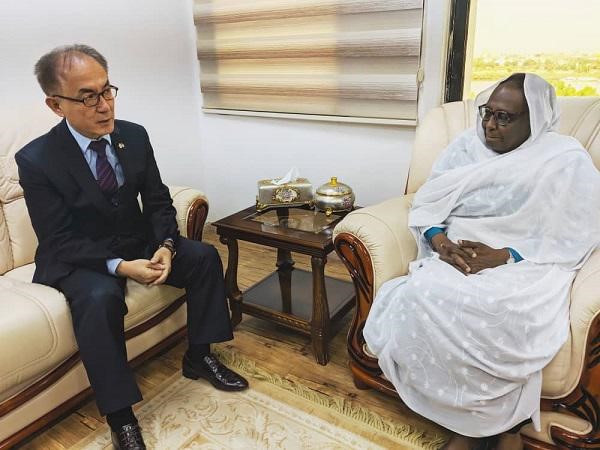 Khartoum, Nov. 12 (SUNA) – The Minister of Foreign Affairs, Asma Mohamed Abdalla, received Tuesday the Ambassador of South Korea to Sudan, Lee Ki-Seog, on the occasion of his office term in Sudan. The minister has appreciated the efforts of the South Korean Ambassador in strengthening the relations between the two countries, and lauded the developmental and technical support being extended by South Korea to Sudan in the areas of water, agriculture and health, especially in the combating of schistosomiasis. She welcomed the appointment of a Trade Attaché in Sudan for the Korea Trade and Investment Agency, a matter which would pave the way for the return of Korean companies to operate in Sudan. She expressed her aspiration for implementing the provisions of the Framework Agreement on Korean Development Support, which was signed last month in Khartoum. The minister has commended the vocational training centers that were established in Khartoum and Gezira States. The South Korean Ambassador has expressed his thanks to the government of Sudan and the Ministry of Foreign Affairs for the support accorded to him during his office term in Sudan. He appreciated firmness of the relations between Sudan and his country, indicating that South Korea looks forward to consolidate further its relations with Sudan. He pointed to the Korean government’s welcome to the signing of the Sudanese constitutional document, affirming his government to help Sudan overcome the challenges of the transitional period. The Ambassador pointed out that the Korean side looks forward for reactivation of the joint Sudanese – South Korean cooperation committees for boosting the bilateral relations. MO