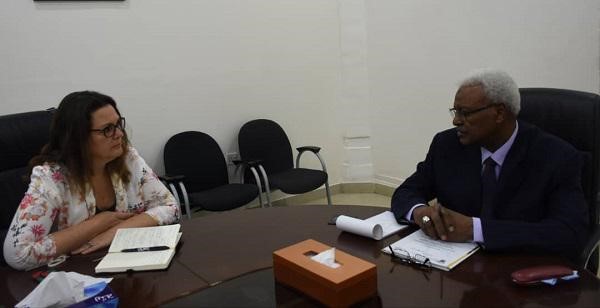 Khartoum, Oct. 30 (SUNA) – The Attorney General, Tajal-Sir Ali Al-Hibir, received in his office the visiting head of the technical delegation of the Human Rights Commission, Ms. Juliet de Revero, and the accompanying delegation and discussed the agreement reached between Sudan and the High Commission for Human Rights to open a country office of the commission in Sudan. The Attorney General affirmed that Sudan has suffered greatly in the past period from serious human rights violations, extra judicial killing and deprivation from the freedoms of assembly and expression despite the existence n of these freedoms in documents. Al-Hibir pointed to absence of a mechanism to implement the agreements ratified by Sudan, a matter which the main cause for these violations, stressing that the Public Prosecution will investigate in all the former violations and identify what has happened in all transparency for punishment the perpetrators. He referred to formation of a number of groups to investigate in all the violations and crimes that were committed since the year 1989 up to the year 2019 and offering the powers of the Attorney General to the independent investigation committee which was formed in accordance with the Constitutional Document. The Attorney General revealed during the meeting that a discussion is taking place with the competent authorities, most notably the Ministry of Justice, regarding amendment of certain law articles, such as the Criminal Law, that relate to indecent attire and abolishing the Public Order Act. The Attorney General pointed out that he has formed a committee of specialists and a re-presentative of the missed families to investigate in the issue of missed persons. Al-Hibir said that he got informed on jurisdiction of the proposed office of the High Commissi-oner for Human Rights, indicating that the tasks of this office are met with satisfaction and appreciation. He pointed to his call on the Sovereignty Council to approve 500 posts to enable the Public Prosecution live up to its role in protecting human rights. The official of the Human Rights Commission, Ms. Juliet de Revero, has congratulated the Attorney General on his appointment during the transitional period which will be full of work, stating that arrangements are underway to establish the commission’s office in Khartoum in next November. She affirmed the commission’s follow-up and monitoring of all that is happening in Sudan and the readiness of its office to contribute to capacity building and technical support and to do all issues to promote human rights in the country. MO