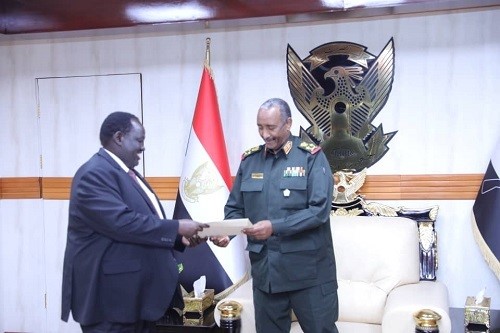 Khartoum, Sept.16 (SUNA) – The Head of the Transitional Sovereign Council, Lt-General, Abdul Fattah Al-Burhan , on Wednesday, briefed on the ongoing arrangements for the celebrations of the peace signing between the government and the Revolutionary Front. This came when he met, Wednesday, at his office, the Chairman of the Southern Mediation, Advisor, Tut Galwak who said following the meeting that he handed him a message from the President of the Republic of South Sudan, General, Salva Kiir Mayardit inviting him to attend the celebrations of the peace signing between Sudan government and the Revolutionary Front. IF/IF