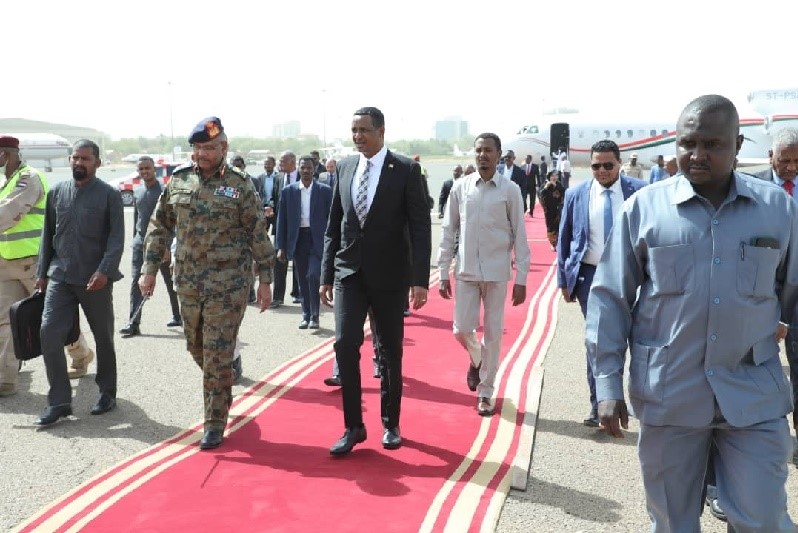 Khartoum, March 15(SUNA)-The First Vice-President of the Sovereign Council Lt. Gen. Mohamed Hamdan Daglo returned home Sunday after a short visit to Egypt which lasted for two days. He was received at Khartoum airport by the Member of the Sovereign Council Gen. Ibrahim Jaber and Foreign Ministry Undersecretary Ambassador Siddiq Abdul-Aziz. The First Vice-President of the Sovereign Council said in press statements that the vis-it was a response to invitation from the President of Egypt, Abdul-Fattah Al-Sisi and that he conveyed to him greetings of the President of the Sovereign Council. He pointed out that his meet with the President Al-Sisi tackled issues with strategic nature and of concern to the two countries , ways and means of strengthening bilateral zrelations, outstanding issues between the two countries , removing Sudan from the list of state sponsors of terrorism and regional and international issues, particularly issues of terrorism and illegal migration as well as issues of Sudanese nationals in Egypt regarding residence, passports and national identity which were raised by the Sudanese community in Egypt. Lt. Gen. Daglo stressed that he presented a detailed report on progress of the South Su-danese peace process, Sudan- Egypt electricity inter-connection and raising the current capacity by adding new line and that President Al-Sisi gave directive for studying the issue, noting that the Egyptian President voiced support to the Sudanese peace and the change that took place in the country. The First Vice-President of the Sovereign Council said that he was assured on the two countries’ s strategic relations , describing his visit to Cairo as successful . AB