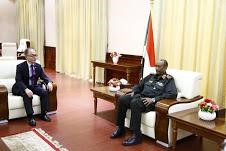 Khartoum, Nov. 12 (SUNA) – Chairman of the Transitional Military Council, Lt. Gen. Abdul-Fattah Al-Burhan, received in his office Tuesday the Ambassador of South Korea, Lee Ki Se-og, on the occasion of the expiry of his office term in Sudan. The Korean Ambassador said in a press statement that the bilateral relations between Sudan and South Korea have witnessed a rapid growth in the past few years, especially in the fields of development and training. He referred to the exchange of visits by officials in the two countries in the past years, adding that the bilateral relations have also taken a cultural dimension reflected by the exchange of visits by musical and heritage bands. He said that his country has contributed to a number of development projects in Sudan in various fields, pointing to the establishment of a vocational training center in the state of Al-Jazeera which was inaugurated last year, as well as health support to combat endemic diseases such as schistosomiasis, stressing that his country will continue to provide support for these projects. IF/IF