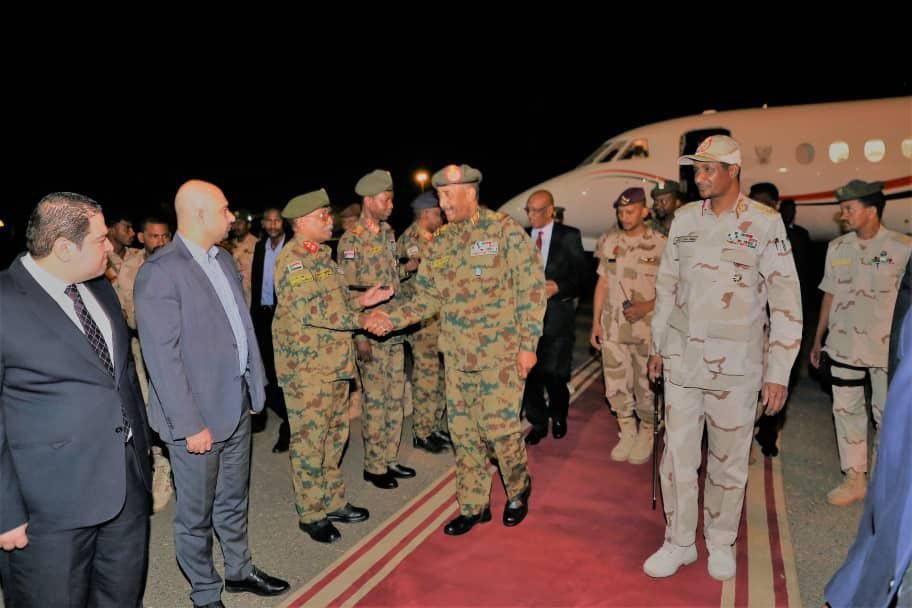 Khartoum, May 26 (SUNA) - Chairman of Transitional Military Council (TMC), Lt. Gen. Ab-dul-Fattah Al-Burhan, returned home Saturday evening after a one-day official visit to Egypt during which he held talks with Egyptian President, Abdul-Fattah Al-Sisi, on thhe relations between the two countries . He was received upon return at Khartoum airport by the TMC Deputy Chairman, Lt. Gen. Mohamed Hamdan Daglo. The TMC Spokesman, Gen. Shams-Eddin Kabbashi, said in a press statements that Lt. Gen. Al-Burhan conveyed to President Al-Sisi the appreciations of government and people of Su-dan to Egypt over its stances in support to to Sudan, disclosing that it was the first external visit of the TMC Chairman which refers to firmness of the relations between the two count-ries. He said that Lt. Gen Al-Burhan has thanked President Al-Sisi, who is the chairman of current AU session, for the considerable efforts he made to address the situation in Sudan. The TMC spokesman said that the Lt. Gen. Al-Burhan presented a briefing to President Al-Sisi on the developments and political situations in Sudan, indicating that the Egyptian Presi-dent affirmed Egypt support Sudan’ security and stability, saying he will exert more efforts through the AU to address the situation in Sudan. Ab/MO