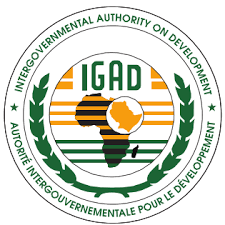 Khartoum, Jan. 9 (SUNA) – The President of the Transitional Sovereign Council, Lt. Gen. Abdul-Fattah Al-Burhan, has affirmed Sudan support to the IGAD in implementing its plans and programs to meet the aspirations of the countries and peoples of the continent for peace, economic development and stability. During his meeting Thursday at the Republican Palace with the IGAD's Executive Secretary, Dr Workeneh Gebeyehu, in the presence of the Foreign Minister, Asma Ahmed Abdalla, the President of the Transitional Sovereign Council called for promotion of the organization's performance through its future roadmap. In a press statement, the IGAD Executive Secretary said that the meeting discussed a number of important issues in the political, economic, peace fields, based on the organization's pioneering role for development in the countries at the region and the progress of their peoples. He pointed to the Sudanese leadership's support to the IGAD and the efforts for reform in the organization to achieve its goals. He pointed out that the current session of IGAD under the chairmanship of Sudan will implement all the previous agreements and present several new proposals for the next session, hoping that that the other IGAD member states will follow suit of Sudan in supporting IGAD. He asserted his confidence in Sudan’s leadership to the organization with its accumulated experiences in the fields of peace and economy, a matter which will contribute to achieving the goals and aspirations of the organization. MO

FM: Momin is not Neglected in Doha Khartoum, Feb. 16 (SUNA) - The Ministry of Foreign Affairs Sunday issued a statement on reports circulated in the m... Read More
5 views
Fm Undersecretary Praised Relations Between Sudan and Kuwait
On 17 February 2020